Hard Corps Uprising is a title available on XBL arcade or PSN for around $15 (1200ms points) for each. It is a prequel to Contra: Hard Corps.

STORY:
The story is VERY simplistic. There is an evil empire ruling the people and you want to stop them, that's about it. Each character has a small text box detailing story before each load screen, but there really IS no ingame story besides the ending cutscenes. There are two characters available by default, Krystal and Bahamut. 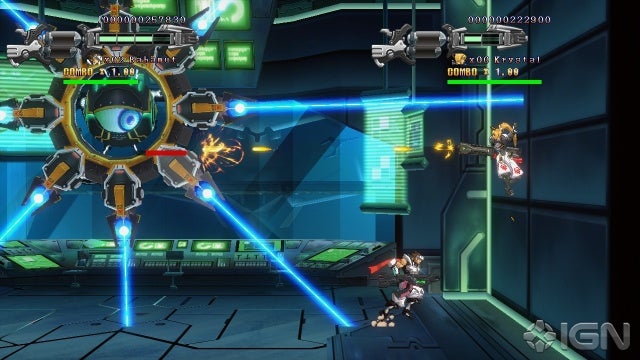 GAMEPLAY:
If you love Contra, you'll love HCU too. It's a side scrolling run and gun shooter with steep difficulty and plenty of Bosses and Sub-bosses to memorize. There are plenty of weapons also, ranging from the Machine Gun to the Chain Laser. There are two gameplay modes, Rising and Arcade. Arcade starts you with a pre-set character, and you have to clear all 8 stages without loosing all your continues. It is very difficult and frustrating with the platforming in the latter levels.(Specifically Stage 7) Rising mode, however, allows you to upgrade your character with all sorts of abilities such as dodging enemies and deflecting bullets. It also allows you to return to any level you've beat at any time, making it less frustrating to play. All in all, it'll be fun if you like run-n-gun shooters or just side scrollers in general. However, if you don't like side scrollers then this won't change your mind. 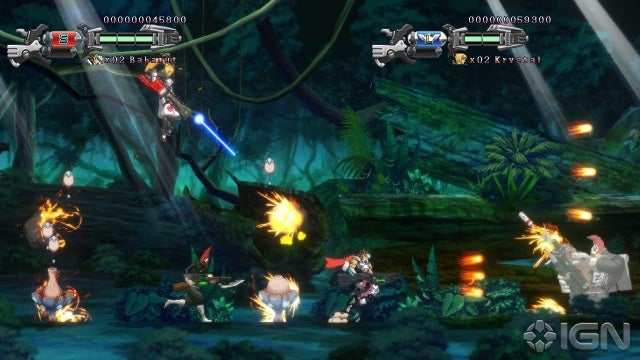 GRAPHICS:
The graphics in this game are amazing to say the least. It is rendered in full 1080p 3D, and it looks awesome. The game is given an anime-cartoon style, setting it apart from the old bland contras.

MUSIC:
The music is very fitting and makes the game feel very intense, especially the final boss theme. You can even get the original contra theme as an easter egg. xD IS IT WORTH IT?
If you enjoy side scrollers or maybe old action movies, then yes. It gives a nice challenge, and never fails to keep you on your toes, even as a maxed out character. It is decently long(around 12-14 hours for rising, but alot longer for arcade mode) for a $15 title, and gives quite a bit of replay value, trying to level your character up. One thing I won't recommend are the two DLC characters, as they are $2.50(200ms points) and don't really add much. This doesn't stop me from suggesting to pick this game up, as it is a blast to play.